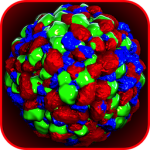 Ever wanted to shrink a friend and pop him in your bloodstream to fight infection when you feel poorly?  No?  Well, you will when you’ve played Anti-virus Adventure!

FREE to download on your iPhone, iPad or iPod.

Here at Muso Labs, some of our boffins have been infected with the Norovirus and are feeling very grotty.  So in an experiment we sent Andy, one of our healthy boffins, on a virus-fighting mission.  Safely inside the ‘Plasma Pod 1000’, Andy was shrunk down smaller than a blood cell and injected into his poorly friend Bernard’s arteries.

Swimming around in Bernard’s blood stream, Andy is now literally fighting infection from the Norovirus; the influenza virus; bacteria and parasites by shooting at them with penicillin and antibiotics.  But … he must not get hit by any of the viruses, bacteria or parasites, as they will kill him!

To help boost Bernard’s health, Andy must catch the Y-shaped antibodies (proteins that detect and destroy bacteria and viruses) and white blood cells (as they help to fight infection). Help Arthur to survive and save poor Bernard from complete misery –

The latest transmission we received from Arthur was …

“It’s nasty, tell everyone to avoid infected people where possible, wash laundry and dishes at 80º and above all … WASH YOUR HANDS!”