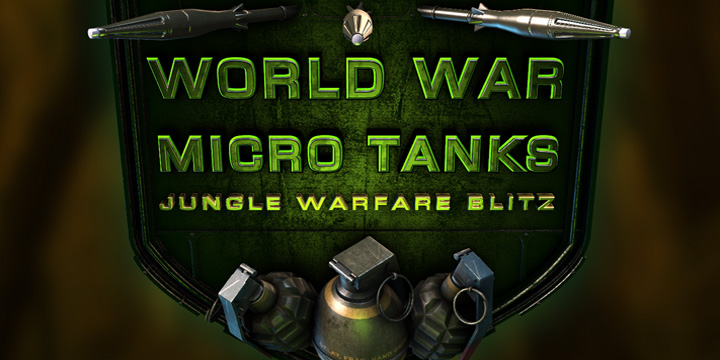 YOUR MISSION:
You are deep in jungle warfare and as the Tank Commander, it is your mission to navigate your crew through the dense jungle with minimal casualties.

The enemy has been instructed to destroy you at any cost and are fully equipped with state-of-the-art, combat choppers, armoured vehicles, extremely fast jeeps and camouflaged turrets. You will experience their constant, brute-force, fire-power as you blitz your tank through this battlefield.

Beware, both the helicopters and turrets are equipped with high-explosive, anti-tank rounds that come at you from all directions – you will need to have razor-sharp reflexes to survive.

PLAYER TIPS:
The Helicopters and Camouflaged Turrets are heavily armoured and take the most shots to defeat. Shoot these as early as possible to avoid multiple bullets flying around.

Collect “Power-Up’s” to help you win the war. If you spot a grenade, grab it fast, it will destroy all enemies within a few seconds and give you a better chance to collect military stars to upgrade your tank. Slow-motion magnets will slow down all enemies.

Shoot as many enemies as you possibly can, this will increase your score to allow you to unlock more tanks.

Mortar Dodge War THIS SEASON’S MOST ADDICTIVE GAME Available on iOS and Android This crazy, world-warfare, arcade, battle has come down to dodging the mortar bombs to stay alive. Simply drag your finger left and right to keep your soldier safe from the bombs....
Read More

Escape From Area 51 Massive Explosions  - Fast Arcade Action  - Killer Drones  - Awesome Power Up’s. They’ve decided it’s time to fight back. The UFO’s have been held captive at Area 51 for decades and all they’ve ever wanted to do, is just go home. The military have...
Read More

Dragon Cave Flying Quest The cutest dragon in all the land is Duke. He needs your help searching the caves for hidden gems so he can unlock his friends Del and Dave. But be careful … Don’t clash with the caves … Flap to survive in the day and at night … Dodge the...
Read More

Santa Christmas Mission Why is Santa on a mission? Well … Everybody knows that Christmas Eve is a very busy time for Santa Claus.  Mrs Claus can’t help but worry about him.  She knows that there are more than 75 million extra people every year!  That means there are...
Read More

The Best Badly Drawn Song Quiz ULTIMATE PARTY APP!  The ultimate song quiz app at parties. Simply stream over ‘Airplay’ to a Mac or Apple TV, get into teams and challenge your friends! Can you guess what the song title is we are looking for? Each picture has been...
Read More

Easter Bunny Hop – Don’t Crush The Candy Our Easter Bunny Hop game is a simple but addictive ‘Twas the night before Easter, and the busiest bunny in the land was pouring melted chocolate into mugs of hot milk while his favourite Easter Jive song hopped and bounced...
Read More