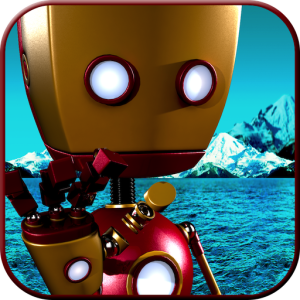 Cast Iron Robot Wars is an addictive space shooter game that will keep you glued to your screen for ages. Playing is really easy too. All you have to do is move Cast Iron Robot on the left of the screen and shoot everything by tapping right of the screen. If you hold down on the right of the screen, he’ll auto-shoot so you can concentrate on the trickier stuff. Collect the bronze, silver and gold coins as you fly through the mountains and you’ll be able to unlock the characters with the heavy fire-power.

Game Synopsis: What happens when you’re the coolest robot in the world?  … Everyone wants to be you.

Cast Iron Robot, the fastest, strongest, coolest robot in the known universe, had won every Robot War the world had ever seen, without a problem … until he was cloned!  Now Cast Iron Robot has to fight himself!  For the first time ever, he needs help.  Will you help the original Cast Iron Robot to defeat the hordes of Iron clones?

Can you help the real Cast Iron Robot fight off the most clones and collect the most coins?

Record your best scores in the Game Center and compete against your friends. There can be only one Cast Iron Robot.