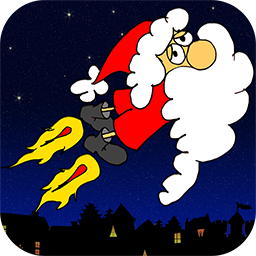 Why is Santa on a mission?

Mrs Claus thought she had the answer and gave Santa an early Christmas present – ‘Rocket Boots!

Santa wasn’t so sure …

“Nonsense,” Mrs Claus straightened his hat for him.  “These Rocket Boots will help you get home early this year and make sure we have time for lovely big mugs of hot cocoa by the fire before we go to bed.”

If there was one thing Santa liked to do after delivering presents, it was to drink hot cocoa and warm his feet in front of the fire.  “Oooh alright then,” he agreed.

Mrs Claus kissed Santa on his big whiskery cheek and smiled as she watched him climb into his sleigh, wearing his new shiny black Rocket Boots.  Within seconds, the reindeer started to pull the sleigh, Santa waved to Mrs Claus and they were off!  Mrs Claus went inside to put another log on the fire.

Santa looked down at his Rocket Boots.  They were very shiny.  The button on the side had four settings – ‘Off’, ‘Single Flame’, ‘Double Flame’ and ‘Triple Flame’.  “Ho ho ho!” he chuckled, speeding over the rooftops, “I wonder what Triple Flame is like?”

CHRISTMAS WILL BE RUINED FOR EVERYONE.

THERE WILL BE NO PRESENTS FOR ANYONE.

AND WORST OF ALL …

NO HOT COCOA FOR SANTA.

So that is why Santa is on a mission  …

*Help Santa to control his Rocket Boots and collect all the presents flying through the sky.

*But beware!  Candy canes, holly and Christmas tree lights are also spilling out of the hole in the sleigh.  Don’t let them hit Santa.

*Using the left side of the screen, help Santa to avoid them.

*You can also use his pocket full of snowballs to keep him safe.

*Ever wondered what Santa thinks as he flies through the sky?  Well now you can hear him humming and singing as he dodges debris, throws snowballs and collects presents.

*The longer you keep Santa safe, the more you will hear him talk and sing!

*All the music you will hear has been specially written for Santa by one of his little elves.

*Remember, the race is on!  The accident with the Rocket Boots has made him really late.

*If you can catch 50 presents, Santa can speed up by using the ‘Double Flame’ setting on his Rocket Boots.

*If you are super fantastic, and collect 200 presents, then you can try ‘Triple Flame’ Rocket Boots.  But be careful, they go pretty fast!

*See how many presents you can collect.  The more you collect, the more presents Santa can deliver!

*Fun for all the family.  See who can collect the most presents!

*If you want to avoid any adverts, simply hit the upgrade button.