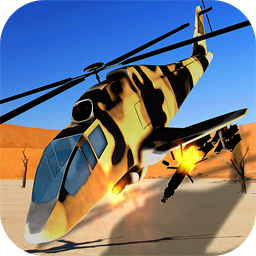 Under the constant threat of war, defence forces have developed better, faster, more accessible ways to dominate battles in the form of  helicopters.

Now with World War imminent, the first show of strength is coming in a wave of attacks from the new World War Helicopters, armed for maximum devastation.

Both Ground and Air Forces have been assembled to take down these new helicopters in these fearsome Helicopter Wars.

As a top World War pilot you are assigned the dangerous task of flying through the desert missions under attack from air and ground forces.  Avoid all enemy fire and shoot all other craft on sight. Collect stars to earn new helicopters.

Can you learn to pilot the 10 different choppers to survive the air combat? The lives of millions are depending on you. Stay alert.  Stay alive.  Good luck, pilot.